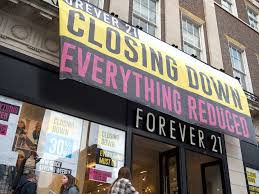 The retail industry witnessed a steady downfall with competition from online shopping. The brick-and-mortar stores have lost their charm, especially in 2017 and 2019.

Customers have changed their shopping habits. Preference for online shopping seems to be the trend now. Heavy competition from Amazon in almost all sectors has pulled the plug on many retail stores. Retail stores that do not refresh their websites, and which do not renew their inventories with the trending fashions are unable to stand the competition.

Giant retail stores have filed for bankruptcy with increasing debt levels. Customers prefer online purchases even for everyday household needs like groceries. Amazon poses a great threat to the retail chains. Keeping up with competition makes retailers spend beyond their capacity, bringing in huge debts.

According to Coresight Researchers, retail closures have touched a record of 5,844 store closures. Store closures are higher in 2019 than what was recorded in 2018. It is up by 50 percent. In 2017, there had been 8,069 closures.

UBS Securities has stated in its April report that 75,000 store closures can be expected by 2026, which means that it would increase from 16 percent to 25 percent.

Bankruptcies have been another reason for the store closures. Big names like Payless ShoeSource, Forever 21, Sears and Destination Maternity have filed for bankruptcy.

Blockbuster was one of the bankrupt companies which closed more than 1,700 stores in 2017. Charlotte Russe mall chain closed almost 510 retail stores and sought Chapter 11 bankruptcy in 2019. Payless closed its 2,500 stores across North America in February.

More from BusinessMore posts in Business »